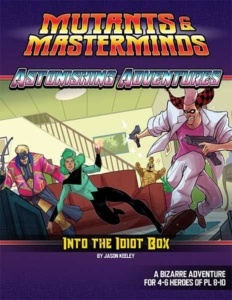 This week sees the release of Into the Idiot Box for Mutants & Masterminds, and Jason Keeley’s entry into the growing Astonishing Adventures line is a unique one, as we discussed with him on last week’s episode of Mutants & Masterminds Monday. In particular, it features the troublesome cosmic kid Quirk from Freedom City putting heroes through a series of … well, let’s say “episodes.”

Among other things, the adventure points to a big difference between superhero RPGs and many others: What Mutants & Masterminds refers to as the “Power Level X” character. Now, I’m on-record as a fan of the comic book trope I refer to as the “lateral win.” Many comic book plots feature challenges, foes, and situations where the heroes simply can’t beat the problem into submission. Instead, they have to use their wits and figure out another way to save the day. Such is definitely the case when going up against characters like Quirk, who are so omnipotent it isn’t even worth trying to define them in game terms (because, as the game-design wisdom goes: “If you give it stats, the players will fight it.”)

Into the Idiot Box is also incredibly topical, and a great M&M game for superhero fans suffering from deprivation when it comes to a weekly dose of comic book characters inserted into imaginary television show scenarios. While the adventure was written well before a certain popular streaming series premiered (great minds, right?) it plays very effectively with similar ideas, and gives you the tools to do the same in your own M&M series.

What if, in classic comic book fashion, the heroes form emotional attachments to some of the “people” they encounter in those television episodes? Will they ever see them again once Quirk has been dealt with and returned to wherever it is he comes from? Who knows? Maybe those “fictional” characters are based on real people in the heroes’ world. What happens when they meet the “real” version of the television character, but they’re a completely different person?

So if you’re looking for a fun, change-of-pace adventure that challenges the players’ roleplaying skills rather than just testing their characters’ power ranks, try sending your M&M heroes … Into the Idiot Box!

Astonishing Adventures: Into the Idiot Box is available NOW in the Green Ronin Online Store, as well as DrivethruRPG!