This week I get to branch out from The Expanse RPG and explore one of the Green Ronin lines I’m less familiar with, Fantasy AGE.  Specifically, I’m looking at Fantasy AGE Lairs (Pre-order and PDF on sale now!).  I’m most familiar with the AGE system from The Expanse and Modern AGE but having read the core book cover to cover I’ve been dying to give Fantasy AGE a try. Since my writing time is precious, I was looking for something that I could pick up and use right away. Skimming through Lairs I saw right away that there was a lot of opportunity here for one shot adventures or side stories that easily be inserted into an existing campaign. Some have enough depth that they could even form the basis for a new campaign. Being a fan of the dark and macabre and both the book and movie Something Wicked This Way Comes I was immediately drawn to The Night Market by Mark Carrol so that’s where my journey into Fantasy AGE Lairs began. I try to avoid major spoilers but if you’re a player in a Fantasy AGE campaign and think your GM might use this book, I suggest stopping here. 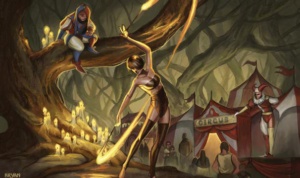 The Night Market offers a rich and dark setting that can easily fit into almost any fantasy campaign. The Night Market moves about so it could set up near any village or hamlet. For that matter, with only a little modification, I could see using this lair in a Modern AGE campaign with a supernatural bent. The player characters come across a wandering market filled with curiosities: acrobats, fortune tellers, merchants with strange trinkets, and sideshows abound. Even without an adventure hook this is exactly the type of diversion that most players will immediately be drawn too. I’ve never known a group of PCs who wouldn’t jump at the opportunity to explore a mysterious carnival!

The thing I liked most about the Night Market is that the setting alone could provide hours of entertainment without ever introducing the adventure that is included. In fact, I could envision the market appearing multiple times in a campaign before the characters uncover its secrets and face off against the villain. The adventure is geared toward higher level characters although the lair itself could be used for characters of any level. Both enemies and possible allies are described in the setting with some of their motivations being left in the hands of the GM.

The adventure is fairly straightforward: people in the vicinity of the market have gone missing and while investigating the PCs meet a ghost (a victim of the main villain) who offers to help them. The powers behind the Night Market are not trivial and could prove to be a powerful and dangerous enemy. As I discussed earlier, this setting is well suited as a reoccurring villain and the Adventure Seeds at the end set this up well. The heroes may rescue the missing villagers and even overcome the villain but he may appear again in a different guise.

The Night Market is definitely one of my favorites and pretty much exactly the kind of entry I look for in a book like Fantasy AGE Lairs and I highly recommend this book for GMs who are looking for individual settings and adventures or just to fuel your imagination. I expect this setting or something close to it will show up in one of my games in the near future!

Check out our previous previews for Fantasy AGE Lairs:
The Battle of the Beleaguered GM
School’s. In. For. EVER!
Getting More than Gothic with the Ghoul Prince

And don’t forget that the Fantasy AGE Basic Rulebook is currently FREE to download!

Salvage Op: An Adventure PDF for The Expanse RPG
Scroll to top Skip to content