Last year, we announced Height of the Storm, the first novel for the Mutants & Masterminds line, by Aaron Rosenberg. Well, we’re counting down the weeks now ‘til publication, so we wanted to give you a sneak peek!

Height of the Storm is about a teenager who gets caught up in some pretty big events. Lindsay Seldon, though, is no normal teenager. The granddaughter of a real superhero, Lindsay grew up wanting to follow in his footsteps, but his overprotectiveness of his orphaned granddaughter keeps her out of the fight. But, caught up in an unnatural storm, Lindsay now has powers of her own, powers that her disability has prepared her for in ways she never imagined.

Donning her grandfather’s old armor, she sets out to thwart a villain bent on revenge.

Height of the Storm will be coming out in August, and will be available at Gen Con! Aaron will be there, so if you want to get your book signed, be sure to keep an eye out for our signings.

In the meantime, please enjoy an excerpt, and this first look at the cover of Height of the Storm, by the incredible Dale Ray DeForest. For more about Aaron, please visit http://gryphonrose.malibulist.com/, and for more about Dale, please see http://www.daledeforest.com/. 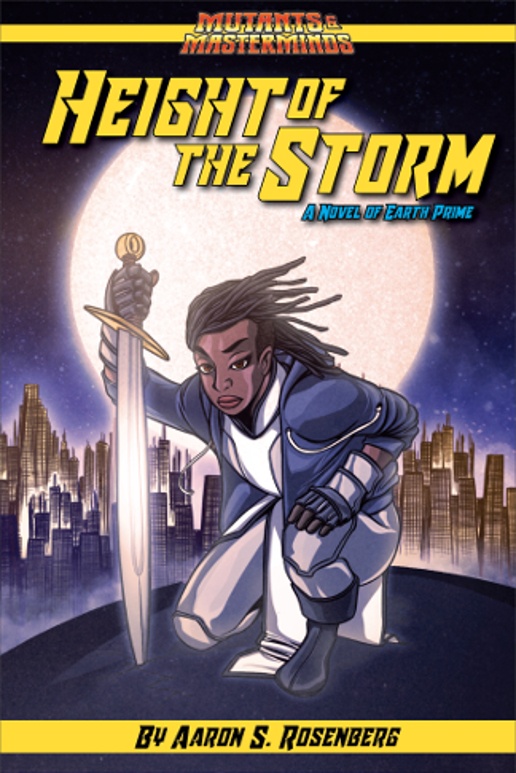 Lindsay gulped and tried to maintain her composure. This was not going at all the way she expected. “That’s not happening,” she replied, pleased to not hear her voice waver. “Put down the gun and submit to arrest, or I will be forced to subdue you.” She rested her hand on the hilt of the sword hanging at her side. Maybe she should have drawn it first.

The mugger’s eyes narrowed. “A sword?” he asked, chuckling. “You for real? I’ve got a gun, sweetheart. You try that, you’re gonna get hurt.” She wondered why didn’t his voice waver at all. Probably because he’d done this, or something like it, a thousand times.

Frowning, she drew her sword—and he shot her. Full in the chest. Dead center even. Well, he’d had plenty of time to aim, she thought ruefully as the impact knocked her off her feet. I’ll have to work on that.

As she fell, Lindsay flailed, both arms shooting forward in an instinctive attempt to latch onto something, anything. If there was one thing she was an expert at, it was falling. Her right hand shot out and grabbed onto the light post, which was a good ten feet away, causing both the mugger and his intended victims—who had stayed there frozen this whole time—to gasp.

But her left hand nailed the mugger in the jaw, the weights in her gauntlet causing his head to snap back from the impact. Gotcha!

Finally, Lindsay’s training kicked in. She was still in mid-air—it was like time had slowed for her, the fraction of a second required to fall feeling like an eternity—and so she brought her left knee up, positioning her foot to hit the ground properly even as she extended her right leg and brought it around and out, knee locked, foot extended into a proper sweep kick.

Time snapped back into place. She was stable and secure, thanks to both her left foot and her right hand, and her right leg took the still-staggering mugger just above the ankles. The impact jarred Lindsay—most likely taking her hip out, which unfortunately she was all too used to—but it swept him off his feet. He hit the ground hard, landing on his back with enough force to drive the air from his lungs as the gun flew from his hand, clattering to rest a few feet beyond his reach even as Lindsay released her grip on the lamppost and rose to her feet, striding over to stand above him.

She winced as the motion aggravated her hip—definitely out of place, probably the knee with it—and her chest, which felt bruised despite the bullet-stopping heavy links. Thanks, Granddad. She hoped she was keeping all of that out of her face and voice, though, as she turned to face the two women. “Are you all right?” she asked.

“Oh, yes, thank you!” the one on the right managed. The other one just nodded energetically, wringing her hands. “That was amazing!”

“Thank you,” Lindsay told her, feeling the same thrill she’d had whenever she’d completed a training maneuver successfully, only a thousand times more. “You two should get on home now. Be safe.”

“We will,” they promised. “Thank you!” And they rushed off, glancing back at her several times. Lindsay did her best not to grin like a little kid on Christmas Day but inside she was bouncing deliriously.

Movement at her feet alerted her that the mugger had rolled over and was trying to crawl away. “Not so fast,” she told him, turning back and crouching down, planting all her weight on the small of his back and pinning him in place as effectively as a tack-secured a strip of paper. “You will wait right here for the police,” she insisted, drawing zip ties from the pouch at her belt and quickly securing his hands and feet behind him, “and you will tell them that the Knight Light is back, protecting these streets once more.”

Then she marched away, reaching into the pouch at her belt for her phone as she went. Her breathing was coming in gulps, and her face hurt from smiling so much; she’d done it! At the same time, her leg and side and chest hurt as well, and for less happy reasons.

This had all sounded so much easier before.