As Sword Chronicle undergoes the final sprint toward release we’ve fielded questions from social media, the GRAAD fan Discord server (we don’t run GRAAD, but we support it) and our online Gen Con panel. You’d like to know about our immediate and future plans, and to respond to some rumors. So, without further ado, here are some answers.

When is Sword Chronicle Coming Out, Exactly?

Our target is August 17. If it doesn’t come out that day for some reason, we’ll immediately announce the new day.

How is Sword Chronicle Coming Out?

Sword Chronicle was originally devised under the assumption that traditional printers and distributors would be unavailable. We also assumed we’d be able to budget far less than usual for Sword Chronicle compared to typical releases of this sort—and even supplements for our core books. Green Ronin President Chris Pramas has talked about how COVID-19 affected the company. We had to use a leaner, more agile process.

This means Sword Chronicle is an electronic first release, available in PDF first, with the intention of setting up print on demand at DriveThruRPG on or around that time. Furthermore, we’re going back to a classic style in RPG production by using a black-and-white or two-color interior, to cut costs for both people printing it out, and possible POD orders.

What Kind of Chronicle System?

We’ve also fielded questions about what iteration of the Chronicle System Sword Chronicle represents. The answer is straightforward: The game uses what is substantially the same as the system seen in the original A Song of Ice and Fire roleplaying game, minus the setting of Westeros, as our license for that intellectual property has concluded. Beyond our ability to swiftly make the game happen, one of the attractions of this is the fact that virtually every setting-neutral Chronicle System supplement remains compatible with Sword Chronicle, so the game automatically drops with additional support. And if you’re still playing Chronicle games using earlier books, you can use Sword Chronicle as an alternative core with few adjustments required. The major differences are:

The biggest new information comes last. At Gen Con we revealed something we’ve only mentioned in small conversations: the Chronicle System Guild. The Guild is a community content program for creators who want to use the Chronicle System to publish adventures, rules, and settings. If you’re a publisher working through DriveThruRPG, you’ll be able to publish Chronicle-compatible products by following the rules and license we lay out. Sword Chronicle will be the rulebook publishers reference.

We’ve been working on the Chronicle System Guild in a sort of intensive stealth mode since June, helping new and established DriveThruRPG publishers prepare their products to launch when the program premieres. We expect additional supplements to follow from our partners. The terms are very close to those of other community content programs, and we’ve tried to keep the restrictions minimal.

The Chronicle System Guild launches at or around when Sword Chronicle does. The goal is a simultaneous premiere, but dates are often shifting targets. Once it starts, you’ll be able to find all the details on DriveThruRPG. 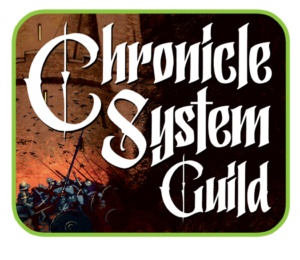