I don’t know exactly when or how I became an introvert—we don’t have the kind of space in this column necessary to go into that—but, sufficient to say, I am what many might refer to as “a private person.” I often feel like I missed the era of the “reclusive writer” who nobody ever saw and who interacted with the world through their agent. What do they even look like? Do they even really exist? In this interconnected age of social media streaming, where everyone carries a camera, that kind of anonymity is increasingly no longer an option.

That’s especially true for those of us who: 1) Have some sort of marginalized identity and feel it is important that we be visible for the benefit of those who might see us, and; 2) Are creatives who need to promote our work by connecting with our audience as directly as possible (which is the say, most of us who don’t have a corporate marketing department behind us). All of which is a long lead-up to the moment that I kind of knew was coming, but dreaded anyway, that moment when Green Ronin’s Community Manager Troy Hewitt said “We’re all stuck in isolation! We’re going to start streaming on Monday!” 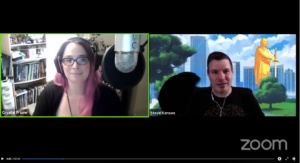 Extraordinary times, right? You see, Green Ronin is a great company for many reasons, but one of them (for me) is that there are a lot of reclusive introverts on-staff. Many of us are perfectly happy working in our own corners of the world, communicating via text, and making the experience of seeing each other in person special by only doing it a few times a year. Fortunately, the (roughly two-thirds introverted) ownership recognized that was not the best way for us to work with our wonderful community of players of our games, however. So they made sure to include some ambiverts and extroverts, who have done things like drag the rest of us into the digital streaming world. Here’s what I have learned thus far from the experience:

Perfect is the enemy of ever doing anything. “We’ll figure it out as we go! We start in three days!” Three days! But…but, the research! The preparation! Nope. We had been stalling doing videos and streams for a long time and were getting no closer to starting. What we really needed to do was start. So we did. Waiting around until you’re “ready” can often mean you never will be.

It’s okay to be seen. By that I mean it’s not necessarily self-indulgent to want to be in front of the camera, and it’s all right to promote, not just your work, but yourself as a creator and as a person. It’s okay to be seen for you and not just as a representative of something else. I’m still working on this one, to be honest, as I’ve never been a particularly good self-promoter, but I think I’m learning.

Striking sparks ignites flames. I often feel social situations are draining, but at the same time, it’s a helpful reminder that certain social interactions, especially with my peers and co-workers, can really help to get us all excited about the things we’re doing and working on. Our interaction creates “good energy.” I find I really enjoy that handful of aforementioned yearly in-person get-togethers, and our online meet-ups—whether streaming or just having a company-wide meeting—can do the same. I feel more recharged and ready to do more work for the rest of the week.

It’s okay to fail. Mind you, it’s not fun, but messing up, having things go wrong, technical difficulties and all of that is a part of life and how we learn. Doing live video streams offers plenty of “learning opportunities.” Good friends and colleagues help us get back up and get back in the game, and we do better the next time. This reminds me a lot of my reckless courage as a young Game Master: I was so excited by the prospect of running each new game I got that I rushed right in. I definitely had some Game Master-disasters (again, we don’t have that kind of space) but I survived, learned from them, and kept on going.

So, if you feel you’re too shy, too introverted, not enough (or too much), or just not ready to do something like streaming, online gaming, Game Mastering, or the like, take a risk in the company of friends, and you can start by joining us. We’re learning in real time, and the people who watch are active participants in what we’re creating. Joining in means you get to have some low-risk fun while seeing how we do it, and figuring out how you might when the time comes for you to step into the spotlight.

I hope you’ll join us for an episode of Mutants & Masterminds Monday sometime!

Green Ronin Publishing’s videos can also be found on our YouTube channel.