Was there an apocalypse, or is this a fever dream brought on by too many energy drinks? Or is Murica, a future nation of trucks, guns, mail order distribution centers-turned-fortresses, and most importantly, mutated feral hogs, truly a Utopia, where everyone can express themselves as the ruggedest of individuals? Find out by testing yourself against this brave new world of mutant Suidae, from running Squealers to the dreaded Hogferatu! 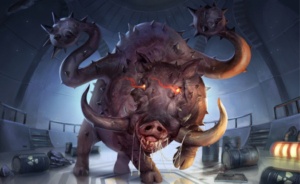 Feral Hogs is a new PDF adventure for the Modern AGE Missions series. Beyond nakedly exploiting the 30-50 Feral Hogs meme from the comparatively paradisiacal year of 2019, Feral Hogs started out as a one shot adventure for the Dice Priori stream. Watch the original session here (though you’ll be spoiled if you do!). We were so amused by it we asked Dice Priori’s Matthew Foreman and Chase Schneider to write it out as an adventure the rest of us can enjoy.

Consequently, it’s our duty and pleasure to announce that Dice Priori will be running a sequel to the adventure on September 23. Visit their stream, watch, and maybe win prizes! And when you’re good and ready, run Feral Hogs for your 1st to 4th level Modern AGE characters. Chug your BEAST energy drink, lock and load, and for Murica’s sake, shoot tens of feral hogs!

The Modern AGE Missions series presents unusual or customizable scenarios for the Modern AGE roleplaying game that aren’t connected to any established AGE setting. The first adventure, Warflower, smashes characters against the problems caused by eccentric modern sword fighters, pretentious drug dealers, and a very weird CEO, where the Game Master decides upon its culminating secret.