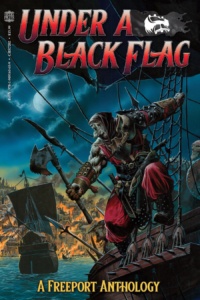 Today is Talk Like a Pirate Day, and in our newest anthology Under the Black Flag, the blood and salt of Freeport breeds a special kind of hero, one usually kicked out of all but the crustiest taverns and immortalized in bawdy songs. Ancient cultists lurk beneath the streets, unknown horrors prowl the depths, but the real trouble is the ne’er-do-wells who walk the city’s streets and alleys.

Under a Black Flag features nine rollicking tales of swashbuckling action centered around the City of Freeport, a fantasy pirate city unlike any other.

Under a Black Flag is available for Pre-Order in our Online Store as well as on DrivethruRPG.

Nisaba Press draws the rich detail and excitement of collaborative storytelling from the world of roleplaying to create immersive fiction for all readers to enjoy.

We believe everyone should see themselves reflected in our stories. By actively seeking out and amplifying the voices of under-represented writers: women, people of color, and LGBT+, we strive to be inclusive of all readers.

While currently focused on exploring the richly detailed worlds created by Green Ronin Publishing, Nisaba Press’s vision extends to a future filled with speculative fiction set in all manner of places, times, and genres.

While you’re here… Would you like to know more about Freeport: The City of Adventure?

Check out our recent updates to the classic Death In Freeport adventure, now available for Fantasy AGE as well as 5th Edition! 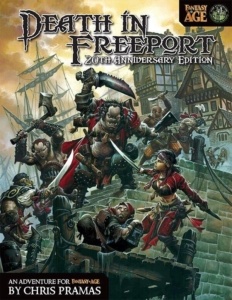 20 years ago, Green Ronin made a name for itself with Death in Freeport, a d20 System adventure released at GenCon the same day as the 3E PHB. It went on to win the very first ENnie Award and the Origins Award for Best RPG Adventure. Return to those halcyon days with this 20th Anniversary Edition of Death in Freeport, now updated to the Fantasy AGE rules!

Chris Pramas—the designer of the AD&D Guide to Hell, WFRP 2E, and Dragon Age—created the city of Freeport for this classic adventure for low-level characters. Add urban sprawl, pirates, and a touch of cosmic horror to your campaign with the City of Adventure.

Death in Freeport has already kicked off thousands of campaigns. Be part of the legend with the 20th Anniversary Edition!

Welcome to Aldea: A Blue Rose Primer
Scroll to top Skip to content