Adventurer’s Guide talks, not about “race” but ancestry, as the Aldeans consider “personhood” a matter of the mind and soul, the souls of the Eternal Dance, given physical form by the gods to save them from being lost to the hunger of the Exarchs of Shadow. Ancestry is a matter of the physical form a particular soul is reborn into from the Wheel of Rebirth. The various ancestries of Aldea—human, night person, sea-folk, vata, and rhydan—are described in “Welcome to Aldea: A Blue Rose Primer.” Here we look at what ancestry means in 5e game terms:

Ancestries in Blue Rose do not apply ability score adjustments. Instead, all characters receive a +2 bonus to one ability, and a +1 bonus to another, both of the player’s choice. Likewise, ancestry doesn’t determine the languages a character knows or speaks, and there are no “racial languages,” that’s a function of the culture the character was raised in. Of course, some people in Aldea are telepathic, so language is often not a concern. 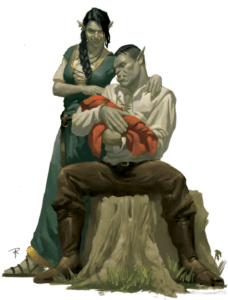 Ancestries do have their own particular traits, whether the adaptability and innate talents of humans, the darkvision and relentless endurance of the night people, the amphibious nature of the sea-folk, or the arcane talents and rapid recovery of the vata. Rhydan in particular have their own traits, given their animal forms, their innate psychic abilities, and their ability to rhy-bond with a particular companion. The Blue Rose Adventurer’s Guide gives full traits for rhy-cats, rhy-fen (dolphins), horses, and wolves, but also guidelines to create rhydan traits for any beast with a Challenge Rating of 1/4 or less.

The various Western Lands of Aldea described in “Welcome to Aldea: A Blue Rose Primer” have their own cultures and languages, and it is these that influence the backgrounds of different characters. Humans are by far the majority ancestry, with other peoples fitting in and around human communities, but humans and vata in the Theocracy of Jarzon, for example, have more in common with each other than they have with their human and vata kin from the Plains of Rezea on the far side of Aldis, for example.

Aldean characters choose a background like any other character, and the Blue Rose Adventurer’s Guide provides local interpretations of various classic backgrounds within Aldean cultures, along with new options, like Reawakened, Refugee, and Shadow-Scarred, and all of their associated traits.

On the Threshold of Apocalypse: Five and Infinity Chapter 5 Available NOW!
Scroll to top