I’m excited. Hal’s been showing me art from the Modern AGE Basic Rulebook (that’s the core game, with all the rules you need to play) as the book goes through the production process (yes, it’s been written, playtested, edited and is now going through Adobe sorcery. Meanwhile, I have a team of authors working on the Modern AGE Companion, a book of optional systems for the game.
In case you missed previous posts, Modern AGE is the AGE system game designed for contemporary adventures, covering a period from the dawn of the industrial era to the present day, with options for different genres, psychic powers, and magic. Since the art is coming in, I want to use it as an inspiration to talk a bit about adversaries, not just in this game, but most traditional roleplaying games. 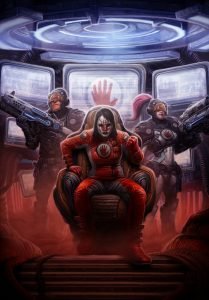 Art by Victor Moreno ~ “They’ve waited a long time to meet her, and you don’t want her keeling over in the first round.”

I’ll be nerd-biographical: Back in the 80s, I was playing in a house ruled AD&D game (who wasn’t, if they were playing back then at all?) where we slashed and burned our way past the “sweet spot” levels, where, at least by the standards of AD&D, the game remains balanced and easy to run. People often identify this range as levels 4 to 8. We’d hit 15th. Our DM Rick was obviously struggling, since he had to choose between foes with raw, big numbers, which turned combat into a grind, and enemies so complex that he needed to do significant planning ahead of time. We came, we saw, we conquered.

Then one day, things were a little different. Rick told Talid, one of the players, to sit right beside him. We got into the game. A wizard teleported behind us—and behind cover—nuked us with a bunch of fireballs courtesy of an item . . . and teleported out again. Talid chuckled. He was playing that damn wizard. Rick had offloaded the job of running a complex adversary to him. We eventually called him the “Devil’s Advocate,” not for the villain he was playing, but for the position. Just like old-school games had “mappers” and “callers,” we had a titled job for the person who played our enemies, distinct from the GM.

Many, many groups have done this, of course, but I don’t mention this for its novelty, but because it taught me a game design principle which I’ve kept in my pocket ever since. Given the same character and familiarity with the system, a player will almost always use that character more effectively (at least in interacting with rules and challenges) than the GM.
I’ve noticed this in virtually every game I’ve witnessed, played in or run, and the reason is easy to tease out of the story, above. A player usually has just one character to deal with. They can become extremely familiar with that character, develop strategies, and devote their full attention to effective play. The GM doesn’t have that luxury; they’ve got other NPCs to run, an adventure to manage, and a campaign to track—and GMing is, for many people, more tiring simply because of the type of social interaction, where you speak to a group and must keep it focused.
And this power imbalance is often frustrating, especially to math-centric GMs, who can see their NPC should be balanced against the PCs, on paper, but ends up being a pushover. It’s not the math. The players are smarter than you—at least in this instance. They have a cognitive advantage.

You can solve this in one of two basic ways. First, you can have a player act as Devil’s Advocate, running villains for you. It’s fun, but in many cases the pendulum swings the other way, and the enemy becomes too powerful to handle.

The other approach is to simplify the procedures for running your enemy. The crudest way to do this is to create adversaries who can only perform one task competently, like beat you up and absorb damage. The disadvantage here is that one-trick enemies can get boring. The variation we use in Modern AGE is to give many adversaries distinct abilities that serve as shorthand for what would otherwise be convoluted sets of abilities, or add flavor that a foe’s basic abilities don’t impart. For example, the Criminal Mastermind adversary has several abilities to stay dangerous without needing to shoot anybody, such as:

(The Criminal Mastermind has other abilities, but you’ll have to grab Modern AGE for the full rundown. I’m not trying to tease, but this post is pretty long. Sorry.)

Both the Devil’s Advocate and streamlining are fine tactics for dealing with PC/NPC imbalance, and which one you use will depend on a bunch of other considerations, such as whether anybody wants to play Devil’s Advocate. Remember that this problem won’t come up if you know the rules better, or can marshal other advantages that compensate for your more diluted attention—and remember that sometimes, the PCs should win. Never snatch victory away when it’s truly deserved.

Earth-Prime Fiction: “Everyone: This Is Kevin”
Scroll to top