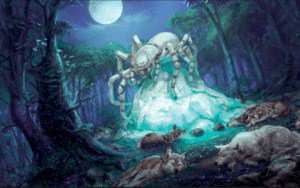 Some time ago, Green Ronin staff were introduced to the wonderful notion of Wolfenoot, a holiday created by a boy in New Zealand as “a celebration of canines, kindness, and humans who embrace both.” We were so charmed by it, that we incorporated our own version into the world of Blue Rose, the holiday of Wolfenmoot, back in 2018. For what could be more Blue Rose than a holiday about kindness along with furry friends and family?

This past holiday season, I wrote “The Wolfenmoot Web,” a Blue Rose adventure focused on that holiday celebration, and a deadly threat that arises during it. It is an adventure for 5th level AGE System characters using the Blue Rose Romantic Fantasy Roleplaying game. Since we were also releasing the new Blue Rose Adventurer’s Guide, in PDF and print-on-demand, “The Wolfenmoot Web” includes a conversion appendix with all of the 5e game information needed to play the adventure as well.

Best of all, “The Wolfenmoot Web” is available as a Pay What You Want release for the Adventures in Aldea line on DriveThruRPG. This type of dual-supported adventure, usable for two different game systems, is a bit of an experiment for us, so we’re eager to hear what you may think about it. Would you like to see more 5e conversions of Adventures in Aldea for use with the Adventurer’s Guide? Drop us a line at letsplay@greenronin.com and let us know!