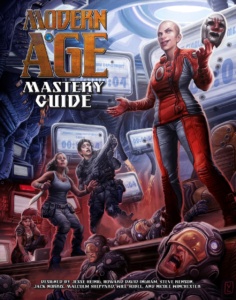 I’m so pleased to announce that the Modern AGE Mastery Guide has gone to press, which means you can preorder the print version, get the PDF now as a $5 add-on with your preorder, or get the PDF on its own in our webstore or at DriveThruRPG. In case you’re curious, we’ve chosen a printer in Europe to keep shipping challenges to a minimum. This is the latest hardcover release for the Modern AGE roleplaying game, and joins the Modern AGE Basic Rulebook, the Modern AGE Companion, and Enemies & Allies as one of its “core rulebook” releases, as opposed to the game’s two settings, the World of Lazarus comic adaptation, and our flagship multiverse, the Threefold Metacosm.

Great news, right? But what is it? Is it a GM’s guide or player’s guide?

I have always hated the idea of separating advice for players and Game Masters, as if one side needs a bag of tricks to use against the other. That’s not how you should play Modern AGE, so that’s not how we do it in this book. Beyond being able to peek into the advice given to separate roles, we’re able to integrate it so the guidance is consistent. This format also makes it natural to provide the high-level advice GMs are used to getting, to players as well.

But it’s not all essays—it works out to less than half the content. The Modern AGE Mastery Guide also contained countless new recommended and optional systems, making it a counterpart to the Modern AGE Companion. Do you want simplified characters? Classes? Diceless play? Numerically rated personality traits? Do you want us to admit Stunt Attack is a little weak? Well, we have you covered.

Look at the table of contents here. 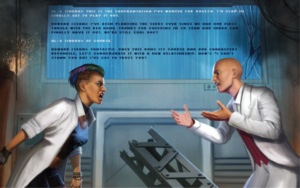 A guide to finding your preferences and improving your performance playing a Modern AGE character. This includes devising a backstory, searching for a role in the party, and how to play with consideration for others’ feelings.

A rules-focused chapter that presents multiple alternatives to standard character creation. This includes non-heroic characters, simplified characters, and character classes. Rules for quirks and personality traits round out the chapter.

Chapter 3: Playing With the Rules

Chapter 3 presents a host of new rules options that are especially relevant for players. This chapter starts with recommended new and revised rules before presenting options for everything from detailed injuries to streamlined encounters.

Chapter 4: Welcome to The Party

An advice-focused chapter covering the ins and outs of playing in a character party. This includes a further exploration of character roles, collective growth, and how to manage intra-party conflict.

Chapter 5 introduces additional rules and advice relevant to players, beginning with rules for customizing equipment, using explosives and other major threats in a low-rules, high drama context, and how to make extraordinary powers come alive in the campaign.

A dive into using and customizing the rules. Aimed primarily (but not exclusively) at GMs, this chapter starts by exploring Modern AGE’s dice mechanics before discussing alternate criteria for target numbers, mixing success and failure, and rules for diceless play.

A comprehensive guide to designing adventures based on scenes, sites, character relationships, and more.

Chapter 8: The Art of Game Mastering

Chapter 8 continues the high-level Game Mastering advice in the Modern AGE Basic Rulebook, delving into GMing styles, practical techniques, and the primary directive for all Game Masters: Be kind.

That’s the Modern AGE Mastery Guide. Get it and add another core book to your arsenal—but there’s still more to come. The Modern AGE desk has another softcover, hardcover, and several PDFs awaiting release—and that’s before a significant Modern AGE-adjacent announcement (which is probably not what you think!) next year. Overall, it’s a good time to get into what I will, with some arrogance but also some accuracy, call the premiere any-setting modern RPG. We got books!

IT CAME FROM THE INTERNET! VTT material on Roll20!
Scroll to top Skip to content