Last time around I started this mashup between Modern AGE and Blue Rose without knowing how much I’d get into it. 90s cartoon romantic fantasy! The setup was so alluring I threw about a thousand words at it, so I had to break it up. Here’s the second part, but let’s go over the essentials again. 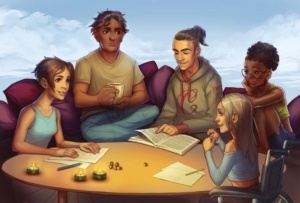 Ingredients: Get out the Modern AGE Basic Rulebook and Blue Rose: The AGE Roleplaying Game of Romantic Fantasy. The Modern AGE Companion, Aldis, City of the Blue Rose, and Envoys to the Mount (preorder hardcover, but the PDF is already available) are also helpful.

The music videos started showing up on what looked like machine-generated streaming video accounts, their names just nonsense alphanumeric strings. It used to be the ability to catch The Blue Rose onscreen was mysterious, but I guess it’s all algorithms now. But these weren’t episodes. They were long music videos of extremely chill electronic music and iconic sounds from a smorgasbord of 90s pop culture, backing distorted scenes from TBR episodes—including clips no fan had seen before (and, allegedly, a game adaptation for the SEGA Dreamcast, because of course)—hammered into a color palette informed by VHS distortion and Windows 95 esthetics.

Yeah, I know what “vaporwave” is! I loved it. I blanked out. The missing time didn’t bug me at first—this was perfect stuff to zonk out to. I started falling asleep to it every night. I dreamed of Aldea.

But you don’t get bruises from dreams.

Accept the truth, even if you think you’re losing your mind. The Blue Rose, both person and series, were true. They remembered us. Aldea is real.

(Oh, look out for your pets. Sometimes they come with you. That means they’re rhydan, and sometimes they remember Aldea better than we do.)

I’ve been on dozens of journeys now, at night or just by concentrating on a video. Centuries have passed since The Blue Rose’s time. Ala is the stuff of legends, and we know more about that ancient hero from TBR fan lore than most Aldeans do from texts and oral traditions. As I grow more comfortable living another life there, I’ve come to believe Aldea returned to help us, but also needs our help. The final battle between the Blue Rose and Jarek seems to have ended in a stalemate, but the lich king discovered our world. He has agents—people possessed by “darkfiends,” straight from the show—who bring back ideas and artifacts. Kern turned its own capital into the first Shadow City raised half by magic, half by Earth industry. Others sprouted across Aldea: tenement blocks and imposing glass towers, smothered in a smog that burns orange by day, and reflects neon-purple flares of magic at night.

I didn’t know why I’d been summoned until I met other fans, some of whom I already knew from conventions and other scenes. Some of us looked different, maybe more like who we truly are than Earth gave us. Five of us had gathered on the other side for three episodes (hold on, getting to that) when we saw The Blue Rose and Golden Hart. They made us Shadowburners: Envoys who know Earth and can save Aldea from its darkness. Apparently, there’s a lot to love about our world, even from the Aldean perspective, but Jarek and his darkfiends have only brought the parts that give them power.

Be careful. I know it’s real not just because of the aches I get after some of the rougher episodes, or even because I’ve met fellow Shadowburners on Earth, but because I’ve seen the Fiendbound, Jarek’s possessed agents, here. Some probably would have been bastards anyway, but I’ve never met one who wasn’t a victim in some sense. On the other side, we can confront demons with swords but here, we need to kill their power over their hosts.

Epsiodes? Oh yeah. One convenient aspect of it all is that no matter how much time we spend in Aldea, with our bodies entranced in the real world as we wear new ones on the other side, once we come back, no more than 24 minutes passes—I’m guessing that’s half an hour, minus commercial breaks. Since I originally crossed to Aldea in my sleep, it took me ages to figure out. Sometimes we even see retro-style animated “fan films” based on what happened, on those same weird streaming accounts.

There’s physical evidence on my body. Testimonials from other Shadowburners. But best of all, I can show you. I know you indulged me when I geeked out about The Blue Rose, and that you’re a lurker on the Sovereign’s Finest group. You’ve seen the show. You’ve got potential.

Now just watch this video with me, and you’ll see even more.

You’re a Shadowburner: Someone who saw The Blue Rose cartoon and was chosen by the Blue Rose and Golden Hart to travel between Earth and Aldea. The Fiendbound steal innovations from our world, and Jarek’s industrial sorcerers fill in the infrastructure blanks with dark, life-draining magic. The nation of Aldis can’t keep up with this evil progress. It relies on Shadowburners to oppose Jarek’s forces and share the gentler things our world has to offer. You’re a good person who (even if you need to get past some psychological barriers) loves diversity. Most Shadowburners aren’t heterosexual, or they have a gender other that what they were assigned at birth. All despise racism, sexism, homophobia, and transphobia. The Golden Hart and Blue Rose are adamant about this requirement, so it’s a firm rule.

As a Shadowburner you lead two lives. The first is your life on Earth, represented by a Gritty (or for gentler Earthside adventures, Pulpy) Modern AGE character. However, you’re capable of learning the arcana of Blue Rose via the Arcane Potential and Wild Arcane talents. You can also learn other talents from Blue Rose, even if they have class requirements, if you meet the following prerequisites:

Rhydan Shadowburners exist as well, but in the real world they’re normal animals that feel bound to their comrades and who generally seem clever due to uncanny instincts. This makes them better suited for players who come occasionally or who want to play a different role in or skip Earth adventures.

Watching a music video connected to The Blue Rose and Shadowburner phenomenon puts you in a trance, and you awaken in a body representing your true self, created from the elemental substance of Aldea. In this form, your character is in Modern AGE’s Cinematic Mode, but with one difference: You don’t use Toughness. In Aldea, characters rely on armor or skill to survive (and as Blue Rose doesn’t use Toughness, this means you can use most material from that game as-is). No matter how much time you spend in Aldea, it only takes a 24-minute trance in the real world. Your fellow Shadowburners can enter trances at different times, but you’ll synch up in Aldea, as is necessary.

In a trance, you’re usually safe from being interfered with—this campaign isn’t about a knife in the back while you’re somewhere else—and while you don’t choose when you leave Aldea, it often happens after an episode-like series of events happen, often with an implicit lesson about tolerance and being yourself. Such is the binding power of a 90s cartoon. Your Aldean body and its immediate possessions turn into a luminous mist, and reform when you’re needed again, in a location set by the Narrator/Game Master. Any damage short of death you suffer in Aldea becomes half that amount, and stun damage, on Earth, so a rough adventure can make you sick or even knock you out. And if you die in one world, you’re gone in both.

The Fiendbound have some way of transporting physical artifacts between realms and have their hooks in government agencies and corporations, but you can’t do it—and finding out why is a major plot hook. Beyond stealing technology and cultural ideas to solidify Jarek’s rule (and giving GM/Narrators unlimited ability to create an industrialized, fascist, and particularly weird Kern), they want to make Earth a more hate-driven place, to create more fuel for the conquest of Aldea and, perhaps, claim another world as their own.

That’s the setup. I suggest you start looking for those music videos now.