Over a number of Threefold articles, we looked at the Sodality, who explore this Modern AGE setting’s countless planes, and Aethon, who deal with threats to the progress of Earth’s history. These groups are especially suitable for Player Characters but aren’t the only possibilities. More to the point, they don’t operate without opposition. While potential adversary groups can come in many sizes, today we’ll look at rivals who rule great clusters of planes: the tyrannical Divine Empire, and the warlike Nighthost. 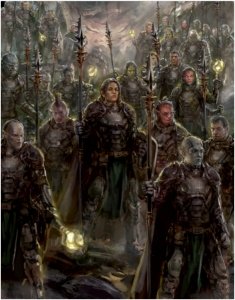 The Nighthost gathers. Composed of many peoples, the Nighthost discriminates only on the basis of martial strength, and unites to liberate Netherworlds, and conquer Otherworlds.

At the end of the great Fellwar for the Metacosm’s souls, most of the Hierarchs, gods who’d instigated the war, went into exile, while mortal survivors founded the Vitane, an interplanar government. Many members of the Vitane were Optimates: half mortal children of the Hierarchs, akin to demigods and legendary heroes. Under the old order they were used to privileges and formed the Imperial Party to argue for their renewal. Meeting with little success within the Vitane, Dyraza, a thunder and sky Optimate and leader of the Imperial Party, masterminded coups on over a dozen planes, declaring herself the Empress of the new Divine Empire. Under her direction, the Empire built an Optimate aristocracy of Prefects, a ruling council called the Pantheon, a Curia of worshipful mortals, and other institutions over 199 years of rule. This period of rapid expansion was significantly slowed by her death. In apparent retribution for campaigns ranging into the Netherworlds, Dyraza was assassinated by Avakim, Alastor Lord of Dust, in an incursion into the Empire’s capital plane of Alatum.

Now entrenched by the following centuries, Divine Empire is ruled with an iron hand by Optimate aristocrats. These include the planar Dominii who populate the Pantheon, and regional Prefects and Subprefects. The Empire demands mortal worship of the Optimates and their Emanate ancestors. This is overseen by the Curia, an assembly of priests and anointed arcanists. Where they fail to sway the commoners, a vast network of spies informs the authorities of disloyalty and intimidates everyone they might report for impiety or treason. The mass of mortal commoners is divided among true believers who tolerate their inferior position in the Empire, and small revolutionary cells. The Sodality is often assumed to support an anti-Imperial insurgency, but few are can verify or deny these allegations.

Born to fight and blooded in the endless battles of the Fellwar, the predecessors of the Nighthost were the terror of the planes. As the Fellwar ended, many Netherworld warriors fled their masters, conquered Otherworlds, and founded an alliance of warlords and mercenaries ruled by thanes who can only be overthrown by sufficiently honorable challengers. As the Nighthost, these rebels founded a new home plane. This is the Fetter, a liberated Netherworld, where they built tribes, cities, and nations under the leadership of the Unchallenged, elders renowned for their deeds. Some say the Nighthost is secretly ruled their old demonic gods, who are marshaling their forces for a final war. But as their forbears were twisted and tormented by these Alastors, the Nighthost bears no love for their ancestral masters. Their ethos is founded in freedom through strength.

The Nighthost has never forgotten how in the aftermath of the Fellwar, the Otherworlds’ inhabitants branded their kind beasts, monsters, and craven slaves of horrific gods. Former soldiers of the Alastors were outcasts on nearly every plane. Only the Nighthost accepted and trusted them. And once given, trust should never be betrayed. To a warrior of the Nighthost, honor is everything, instilled from the moment of birth to their dying breath. Therefore, even as their armies conquer plane after plane and install thanes to rule the defeated natives, they moderate their cruelty with an ethos that grants power to the deserving.

Sodality members most often encounter the Nighthost’s warbands: small groups of soldiers who fill the same strategic niche as the Sodality’s Missions. Warbands have primarily military aims but are neither ignorant nor aimlessly violent. Their members are often as learned and clever as their Sodality counterparts.

Oh right! Last time I said I’d talk about that. Well, I changed my mind; it’s coming next time. You can preorder Threefold now with the PDF add-on or get it in PDF to read about the concept in detail yourself or wait for its street date: September 3rd!

Fantasy AGE: Shaking the Pillars of Heaven
Scroll to top Skip to content