Last time, we made a brief mention of one of my favorite elements of the new Mutants & Masterminds SuperTeam Handbook: Roles. Think of these like the roles in a casting call: you are putting out a call for tall, handsome, and likeable with good comedic timing, but you’re not necessarily looking for Chris Hemsworth specifically (kidding; I am always looking for Chris Hemsworth; that man is a delight). Roles are guidelines and suggestions about the part you want to play. Broken into Tactical Roles and Concept Roles, they help you define who you are in relation to your teammates so that you can stand out and shine while still playing a part in the greater story. Each one provides guidance on how to build your characters, what powers and advantages help you fulfill your role. If each player picks a Tactical and Concept Role before building their character, it can help guide tough decisions in character creation and ensure heroes aren’t tripping over each other in combat. 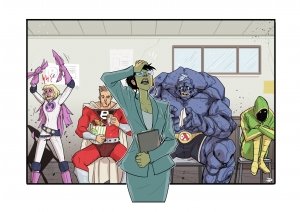 There are several examples of each role, so like a true gamer, I’m going to roll randomly for examples, and we’ll see if we can put together a character concept from the combination: For a Tactical Role, I got Protection, and for the Concept Role I got Hotshot. Let’s take a look at the general description for each.

While the Assault and Control characters dominate the battlefield, it is up to the Protection hero to keep people safe—both their teammates and often innocent civilians in harm’s way. Heroes in this role might interpose their own invulnerable forms to deflect attacks or use powers to create protective barriers. Protection heroes also help with the aftermath of combat, using their abilities to treat or heal injuries.

You have got it and, given half an opportunity, you intend to prove it to the world! The Hotshot is a show-off, daredevil, or showboat, the hero who is looking for a spotlight and, if there isn’t one, will create it. Some Hotshots are just confident (many would say over-confident) and enjoy showing off what they can do—as many people would given the kinds of powers wielded by superheroes. Others are arrogant and need to demonstrate their superiority, or lack self-esteem but compensate with a show of bravado; fake it ‘til you make it!

Hotshots are generally earnest, even lovable, but they’re the first to look for trouble or stir it up if they can’t find any.

Each Role offers some trait suggestions, such as “Hotshots tend toward physical traits, whether incredible athletic prowess or impressive physical powers like super-strength or energy projection,” and “Interpose is the classic Protection hero Advantage, while other general Advantages like Diehard, Great Endurance, Instant Up, and Second Chance are useful to ensure the character stays in the action. Combat Advantages like Move-by Action, Redirect, and Set-up can help turn defense into an offensive edge for allies, while Leadership helps them to bounce back from some common conditions.” To me this screams a nigh-indestructible and incredibly annoying prank-themed hero who focuses on distracting villains. If we give her a high Presence, plenty of Deception, and advantages like Taunt, Redirect, and Set-Up, we already know she’ll be spending her action almost every round on taunts and jibes, either to goad the villain into doing something self-destructive or to set her allies up for a solid right-hook. Since she won’t be attacking as often, I can save some points by not giving her the best attack or damage in the world—say a +10 to hit but only 3 or 4 damage—and pour what I save into defenses or a few fun ancillary powers like Senses or Leaping so she can have a few stand-out moments when it comes to investigations or chase scenes.

Let’s put it all together:

Barbara Quip was a mousy accountant who enjoyed her simple life of work, reading, and cat videos, but found her life turned upside down when her bank was robbed by the villain Fear-Master (check out Freedom City, 3rd edition for his background). The duke of dread’s subsonic fear devices drove the bank into a panic, but for the meek young woman who had never experienced so much as a horror film, they ratcheted her mind into catatonia. When Barb finally awoke days later in the hospital, the doctors explained that her amygdala—the fear center of the brain—had suffered heavy scarring, leaving her incapable of feeling fear. The same damage left her adrenal glands in permanent overdrive, transforming the shy young woman into a hyperkinetic, manic shadow of her former self. Barely in control of her emotions, she took disability leave from her quite day job as she learned to adjust and became an urban thrillseeker by the name of Nuisance.

While Nuisance has the speed and accuracy to kick the tar out of a few bank robbers, she needs to rely on her wits and her more practical teammates to face any dire threats. That’s fine by her, as she likes the near misses and the snappy one-liners a lot more than she likes bruised knuckles.

I’m kind of excited to play her. She’s well outside my normal M&M wheelhouse, so I wouldn’t have normally considered this kind of build. Hopefully I can convince another player to look at the Assault Tactical Role and the Role Model Concept Role so she’s got a straight-laced partner to play off of!

Who’s Who and What’s What

In the previous blog, I mentioned that I’d give you the lowdown on the various teams this week, so here we go!

Hmmmmm…. but which one do we look at in detail next week?