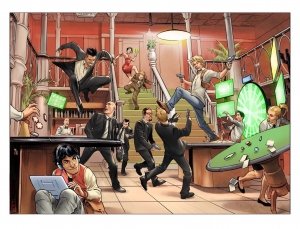 We’ve spent the last few blog entries detailing some of the cool chapters in the SuperTeam Handbook that let you build your team from the ground up for thrilling heroics.

One of the most beautiful things about the Mutants & Masterminds system is its flexibility. While we generally sell it as cape-and-cowl set flying around throwing busses and fireballs at each other, the bare bones of the system can handle almost any action- and intrigue-focused flavor of modern, scifi, or historical games. One of the big goals of the SuperTeam Handbook was to provide a stealth campaign guide for more than just four-color heroics (there are plenty of those, too). Project: Freedom is classic superheroics mixed with behind-the-scenes political intrigue. The Upstarts are all about sabotage and civil disobedience. The Shadow Knights are chopsocky and ninja weirdness. And today we’re going to take a closer look at Red Group, an experimental AEGIS team who use criminal’s tactics against them with con games, theft, and sabotage to stop crooks and villains before they can threaten the world!

The public image of AEGIS, the American Elite Government Intervention Service, is dominated by steely-eyed operators or agents in heavy MAX power armor, who engage criminal organizations, terrorists, and supervillains. What the people don’t see are the five ordinary looking men and women quietly watching from nearby coffee shops or store fronts. They couldn’t imagine that these run-of-the-mill individuals are part of a new AEGIS initiative: Red Group, a pilot program sponsored by none other than Stewart “Rockstar” Bonham, Chief Administrator of Freedom City’s AEGIS operations.

The idea for Red Group was born from an unexpected skirmish between members of the Santa Muerte cult and SHADOW cells in Freedom City. The Santa Muerte cult under undead Tepalcatli had restricted their operations to Central America and the southwestern United States, but when SHADOW tried an aggressive push into the Mexican state of Chiapas, Tepalcatli retaliated with strikes against SHADOW operations in Freedom City, almost burning down Southside in the process.

AEGIS’s post-incident audit absolved the crimefighting agency of any failure to intercede and prevent this tragedy, but there was one voice of dissent from inside the Command Division: Analyst Jessie Baker. She claimed the Command Division had possessed actionable intelligence well before the Santa Muerte/SHADOW war, and that they failed to capitalize on it early enough. And when Command did pass the information along, it was through the Directorate arm first—standard protocol—preventing the Agent division from moving on the intelligence earlier. The auditors were ready to ignore Analyst Baker’s accusations; she had a reputation for rubbing people the wrong way, and her actionable intelligence had been little more than conjecture at the time. At best, her correct prediction was a coincidence, and they thought even that was generous. But Chief Administrator Bonham was intrigued. Baker may have the tact of sandpaper, but her predictions over the years had time and again proven correct off the faintest evidence, however untraditional her methods.

Bonham concluded there was a critical flaw in the way AEGIS communicated between the analytical thinkers who gathered intelligence and the structural thinkers who decided how to act on it. The analysts were having a hard time convincing the military and bureaucratic arms of potential threats because of how both sides parsed data and how analysts were able to think outside the box for deductive reasoning. The criminal organizations of the world were uniting in the interests of business, and they were sharing disciplines while governments were still restricted by their own borders. AEGIS had lost the ability to be agile under a heavier bureaucracy. Bonham also recognized that Baker was in danger of being fired by her superiors or walking away out of frustration, but she wasn’t just an asset. He saw in her the promise of a new AEGIS, a more fluid and dynamic organization that could predict and act rather than waiting for an event to warrant a response. So he offered her an opportunity instead.

Red Group is an autonomous unit under the direct supervision of Chief Administrator Bonham. It falls somewhere between the Command and Agent divisions, essentially allowing analysts to train and operate like agents in order to immediately act on the intelligence they gather in the field. Off the record, Red Group consists of five members—all specialized, all talented, and all an awkward fit for AEGIS itself—whose processes and instincts haven’t yet been dulled by years of rote paperwork and procedure.

Red Group is a secret arm of AEGIS for one very simple reason: Their mandate is to think like villains in order to predict upcoming conflicts and sabotage them before they happen. Their operations consist of five primary goals:

There’s one other mandate that Bonham insisted on. While Red Group has access to AEGIS’s supplies, housing, equipment, and deep pockets when a crisis calls for it, Bonham wanted them operating autonomously with fewer strings connecting them to their mother organization. This meant building up their assets and connections to foster street cred, to better understand how villains might work, and to avoid relying on AEGIS given the organization’s distrust of Bonham’s pet project. Red Group rarely operates out of the institution’s primary office, known as the Iceberg, in Freedom City. Instead they operate from a variety of temporary locations scouted by Baker and rely on black-market and stolen resources. Their techniques are unconventional—illegal in some circumstances—and justified post-mortem by how effective they are at preventing death and destruction. How exactly this approach will be seen by the general public if and when Red Group ever comes to light remains unknown, but for now their mission is to save lives, and their playground is every shadow in the United States.

Superteam Handbook: They Grow Up So Fast
Scroll to top Skip to content