I love working on book covers. It’s not my primary skill set, but I’ve done enough now to feel vaguely competent, and I’ve gotten to work with some incredible artists, so I’ve learned a lot.

But this is the first time I’ve written “The Pomeranian is the wrong shade of green. We need him to look more radioactive.”

Thankfully, the artist, Dale Ray Deforest, took it in stride and did, indeed, make the Pomeranian a more radioactive green. 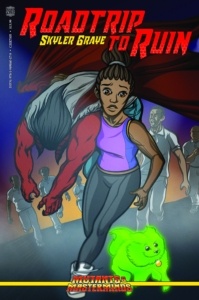 This book has been quite a lot of fun to work on in general. I first met Skyler in Austin, Texas, during one of the most memorable weekends of my life – I was at World Horror Convention, got the worst food poisoning of my life, was breaking up with a boyfriend, and had my first book signing for my first anthology (I did that signing half a bottle of Jack Daniels in, because it turns out whiskey can help calm food poisoning). I loved her work, and when I needed an author to write a Mutants & Masterminds novel for Nisaba, she was an immediate choice.

She had a strong concept almost immediately, and turned over a draft that had me laughing as I read it. The basic premise is a familiar one: a girl entering adulthood, trying to find her way into her new responsibilities.

In Roadtrip to Ruin, there’s nothing normal about Hannah’s life. Going to school with a rich social media celebrity, breaking people out of the hospital, trying to make friends with a demon, and embarking on a road trip to find out where she came from, that’s all just Monday for Hannah.

And yes, the dog is green.

Jaym Gates is an editor, author, and project manager based in Seattle. She has edited titles including Broken Time Blues, Upside Down, Strange California, Legends of Strategy, Eclipse Phase: After the Fall, Genius Loci, and War Stories. Her fiction has appeared in Goldfish Grimm, Grendelsong, M-Brane SF, and many more, as well as in her short story collection, Shattered Queen. She acquires and develops fiction for Falstaff Books and other clients. She is the Line Manager for Nisaba Press, and Green Ronin’s Editorial Coordinator. You can find out more about her at jaymgates.com, or on Twitter as @JaymGates.

Orbit and Green Ronin Partner Up For The Expanse Drawing