This morning we have launched a crowdfunding campaign for a new 5E edition of the Book of Fiends on Game On Tabletop. It’s a great book and we hope you go check out the campaign. If you weren’t gaming in the early 2000s, you may be wondering what the Book of Fiends is exactly and why its return is exciting? Conveniently enough, my last post about the history of the company segues nicely into this, so pull up a chair by the fire and let me tell you a story. 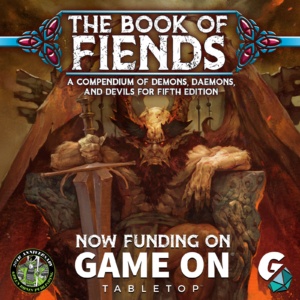 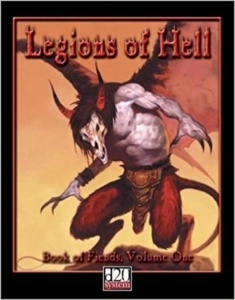 Our first monster book for 3rd Edition. Published in 2001!

Last time I told the tale of Green Ronin’s big launch as a company in the summer of 2000. With the success of Death in Freeport, the immediate course was clear: more Freeport adventures! So we commissioned Terror in Freeport and Madness in Freeport from Rob Toth and Bill Simoni respectively. I would develop those books, but I also wanted to design something else. Since I had written the AD&D Guide to Hell, I decided something infernal would be a great (albeit unofficial) follow-up. And hey, I still had all my research books and notes from the Guide to Hell so even better. The result was Legions of Hell, Green Ronin’s first monster book. It included a bunch of new devils, and my take on the Lords of the Nine Hells. A subtitle on the cover pointed towards the future. It said, “Book of Fiends, Volume One.” 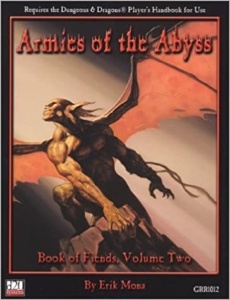 Published in 2002, and written by Erik Mona

Legions of Hell was another huge hit for us, so it didn’t take me long commission Volume Two. Demons were the obvious choice, so I hired my co-worker Erik Mona to write Armies of the Abyss, which came out in 2002. Erik would, of course, go on to great heights as the publisher at Paizo, but at the time he helped run the RPGA at WotC and Armies of the Abyss was his first RPG title credit. He had fun creating new demon lords and added a new type of demon called the qlippoth that would later migrate to Pathfinder via the Open Game License. Erik did a great job and the book was another solid hit for us. So on to Gehenna, right?

Well, yes, eventually but it was a bumpy road to get there. The first person I hired to write Hordes of Gehenna dropped the ball on the project and had to be replaced. That delay proved fateful because in 2003 WotC announced a 3.5 edition of the D&D core rulebooks. 3.0 books were still mostly usable but there were so many small changes in the rules that it became inconvenient to do so. I decided therefore that Hordes of Gehenna would no longer be a stand-alone book. Instead, it would become part of the Book of Fiends, alongside 3.5 updated versions of Legions of Hell and Armies of the Abyss. Those original books had been modest 64-page softbacks. Book of Fiends would be a hearty 224-page hardback. 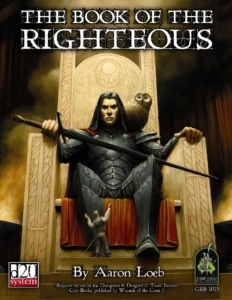 The Original Book of the Righteous by Aaron Loeb, published in 2002

Three people were key to making the Book of Fiends a reality. First, there was Aaron Loeb, who had written the Book of the Righteous for us in 2002. This is a great book (already updated to 5E a few years back) that presents a complete cosmology, mythology, pantheon, and attendant churches. As part of that Aaron re-concepted Gehenna and that became the basis on which we built Hordes of Gehenna. Aaron’s partner in that was Robert J. Schwalb, who had begun freelancing for us in 2002 with the Unholy Warriors Handbook and would soon come onboard as our d20 line developer. Last but not least, there was Jeremy Crawford, who in addition to editing did much of the 3.5 updating the book required. Jeremy was very good with the rules, and—surprising no one who has worked with him over the years—he went on to work at WotC and is now the Leader Rules Designer for Dungeons & Dragons. 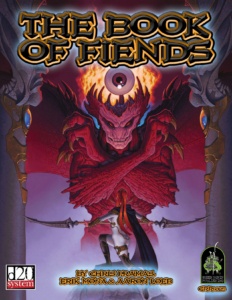 The original Book of Fiends, published in 2003!

Book of Fiends came out in 2003 to critical acclaim and great sales. Turns out GMs really love a book chock full of evil outsiders! The following year the Book of Fiends won an ENnie Award.

Today the Book of Fiends returns on Game On Tabletop! Rob Schwalb, who was on the D&D 5E design team, updated and expanded the book. It’s getting the full color treatment this time with all new art. And if we unlock enough Level Ups (what Game On calls stretch goals) we can add fun PC options, an adventure, and tie-in short stories from Nisaba Press (our fiction imprint). Are you ready for some evil? Because we’re bringing the evil.