Critical Role fans, you have questions about the release of the Tal’Dorei Campaign Setting book. So many questions! Rather than answer hundreds of tweets individually, I’m just going to lay out exactly what is going to happen with the book and when. Gather your party, because we are venturing forth!

The Basics: Critical Role: Tal’Dorei Campaign Setting is a 144-page hardback sourcebook. Matt Mercer wrote it himself, with assistance from James Haeck and development by Green Ronin’s own Joseph Carriker.  The book is full color throughout and features terrific art, as well as an awesome poster map by master cartographer Andy Law. The MSRP is $34.95 for the printed book.

Release Date: The book debuts on August 17 at GenCon. Note that it is NOT a GenCon exclusive! If you can’t make it to the show, you can still get the book from us, your local game retailer, and other sources. It should be in stores in the US and Canada by the end of August, and other countries in September.

Pre-Order and PDF: We will open up pre-orders in mid-July. We have a program called Pre-Order Plus that we use for most of our releases. Here’s how it works. If you order the physical book directly from us or from a participating brick and mortar retail store, you can get a PDF of the book immediately for only $5 more instead of its usual cost of $18.95. You’ll be able to buy the PDF separately at its regular price at this stage if you only want the electronic version.

If your local game store is not part of the Pre-Order Plus program, they can contract our sales team and sign up for the newsletter at this link: https://greenronin.com/retailer-support/.

Note that while we do sell into the book trade—so you can find our games on Amazon and other online vendors—the Pre-Order Plus program is only available through our online store and participating brick and mortar retail stores. (By brick and mortar, we mean stores that have a physical location, not online only sellers.)

GenCon Pickup: You will be able to pre-order the book, take advantage of the Pre-Order Plus program, and pick it up at GenCon. This will guarantee that a book will be waiting for you at our booth on August 17. There will be a special item in our online store for this when we open the pre-orders. Make sure you read the details at that time.

Shipping: We charge the actual costs of shipping. If you live overseas, this can, we know, be expensive. We do sell to international game distributors, so our best advice if shipping is too excessive for a direct order is to try to get your local game store to bring the book in. Stores in other countries can participate in the Pre-Order Plus program as well.

So that’s the skinny! To keep up on news about our Critical Role and other releases, bookmark this website or follow us on Twitter at @GreenRoninPub or on Facebook at https://www.facebook.com/GreenRonin. Watch for the pre-order going live in mid-July!

SEATTLE, WA (01/24/17): Green Ronin Publishing announced today that it has signed a licensing agreement to release a tabletop roleplaying game sourcebook based on The Lost Citadel, a transmedia shared world. The dark fantasy RPG will draw players into the setting of Zileksa, a land ravaged by death and undeath, where all that’s left of civilization has gathered behind the walls of the last remaining city of the living. The announcement was made by Chris Pramas, president of Green Ronin, and C.A. Suleiman, editor of The Lost Citadel.

“We are eager to bring a new dark fantasy setting to roleplayers and to offer Fifth Edition gamers a world they haven’t seen before,” said Green Ronin President Chris Pramas, “Lost Citadel is a perfect follow up to our work on Warhammer Fantasy Roleplay and Dragon Age.”

“I came to know The Lost Citadel as a backer of the fiction anthology,” added Green Ronin General Manager Nicole Lindroos. “As soon as I saw it I recognized the potential inherent in the setting. I couldn’t be more pleased not only to bring Lost Citadel to roleplaying, but to have C.A. Suleiman himself on board as developer.”

“Since the Lost Citadel project went live, people have been asking about when it would come to gaming, and I’m excited to tell them that the moment has arrived,” said Suleiman. “As both a dark fantasy setting and a concept that’s expressly inclusive of women, I can’t think of a better fit for The Lost Citadel than Green Ronin, publisher of A Song of Ice and Fire Roleplaying and the Blue Rose roleplaying game. If their track record is any indicator, this could be the start of something big.”

Work is now underway on the first book, Lost Citadel Roleplaying, which introduces the setting and establishes its core rules and themes. It is scheduled for release in Winter 2018. All books in the series will use the Fifth Edition rules, but plans are in the works to offer fans of other popular RPG systems the means to play Lost Citadel games using those systems, too.

About The Lost Citadel

The Lost Citadel™ is a transmedia experiment that harnesses the talents of writers, artists, musicians, and more, in a bid to explore the themes and aesthetics of a shared world. Founded in 2012 by C.A. Suleiman, Ari Marmell, and Jaym Gates, the project launched online and came to Kickstarter soon after, successfully funding the creation of an anthology of short fiction called Tales of the Lost Citadel, which featured the talents of a cast of veteran dark fantasy authors.

The Book of the Righteous Kickstarter campaign is now live, so please check it out, and give us whatever support you can. Thank you! 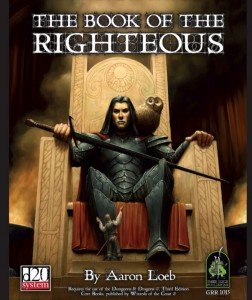 As fans of Dungeons & Dragons Fifth Edition no doubt know, Green Ronin worked with Wizards of the Coast last year to create two books for the official game line: the super adventure Out of the Abyss and the sourcebook Sword Coast Adventurer’s Guide. This was a great opportunity for Green Ronin and gave us important experience with the 5E rules. When our partnership with Wizards of the Coast was announced, people wondered if we’d be doing more 5E books on our own. Green Ronin had made its name publishing 3E material as one of the first d20 companies back in 2000 after all. And my own history as a designer stretches back to Second Edition with books like Guide to Hell and Slavers. We decided to wait until WotC had announced the licensing arrangements for 5E though, and a couple of months ago they did just that.

I’m now happy to announce that we will indeed be doing 5E material and we’re going to start by revisiting one of the most critically acclaimed books we published during the d20 era: The Book of the Righteous by Aaron Loeb. Aaron texted me some months ago and asked, “Why isn’t there a 5E version Book of the Righteous?” I told him that I fully intended to make one if the licensing situation clarified. It did and now here we are!

Later this month we’ll be launching a Kickstarter for a new edition of this classic book. The mechanics will be fully revised for the 5E rules. You may have heard of the person designing the new rules material: one Robert J. Schwalb. Rob not only worked as our d20 developer for many years, but also went on to work for Wizards of the Coast and was on the design team for D&D 5E. Safe to say that the mechanics are in good hands with Rob and we’re always delighted to get to work with him again.

So what is Book of the Righteous? Simply put, one of the most comprehensive pantheons ever seen in roleplaying games. It presents more than 20 pick-up-and-play churches corresponding to gods that feature in most fantasy campaigns (god of war, god of justice, etc.). Each church features lavish detail, including in-depth information on its clerics, holy orders, dogma, prayers, and rituals. These churches can be used in any campaign to bring a whole new level of detail to the religious characters. Plus, for those who don’t have a complete cosmology in their game, the Book of the Righteous provides a comprehensive mythology that unifies all of the gods in the book. That mythology, and its corresponding cosmology, is not tied to an existing campaign setting, making it as portable and useful as our long running Freeport series. If you want in-depth religions for your campaign, The Book of the Righteous is for you.

I’m excited to bring back the Book of the Righteous. It’s one of my favorite things that we’ve ever published and the original has been out of print for a long time now. I hope 5E fans embrace it the way 3E fans did before them. I’ll also be forthright in saying that this Kickstarter is a test of the 5E market for us. If the Book of the Righteous Kickstarter does well, that will tell us that there is demand for 5E material from Green Ronin. If you want to see more of that, back it!